How To Create Photo Albums on the iPad

How do you make albums on the iPad?

I have lots of photos and would like to separate or move them into different albums.

There are a couple of ways to create photo albums on the iPad, it really depends on where the photos are coming from.

Lets take a look at the Photos on an iPad to get started.

If you tap on the “Photos” icon on your iPad, you will see a screen that has three choices across the top; Photos, Albums, and Places.

If you want to view all the photos on your iPad together, tap on “Photos” and the display will contain thumbnails of all your photos which you can then scroll through.

Tap on the “Albums” button and your photos will be grouped together into albums.

On my iPad, most of these albums are folders that I have synced from my computer through iTunes. If your photos that you want to put into albums are from your computer, you will need to sort them into folders on your computer, and then sync them to your iPad. The folders become albums on the iPad.

One of the albums on the iPad is called “Camera Roll” these are the photos you have taken with your iPad.

These photos, you can sort into albums right on the iPad. Let me give you an example.

I have lots of pictures in my Camera Roll. Some are pictures I have taken with the iPad, some are goofy pictures people have taken while playing around with the iPad, and many are screenshots (I like to keep a memory of the very few times I beat my son at Words With Friends). Some screenshots are for tutorials like the version of this tutorial on my blog, some are just for fun, and some are recipes that I found in my iPad magazines.

Note: to take a screenshot of your iPad, iPhone or iPod Touch, hold down the power button while you press the home key.

I didn’t want the recipes to get lost in the big camera roll album, so I am going to make an album just for recipe screenshots. Here is how.

1. Go to your Pictures app on the iPad, and tap on “Albums” if you are not already in album view.

2. Tap on “Edit” on the upper-right corner of the screen.

3. Tap on “New Album” in the upper-left corner of the screen. 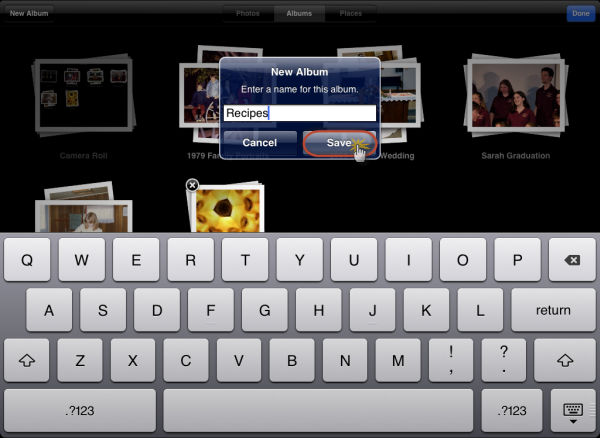 5. All your photos will now be displayed, scroll through the list, and tap on the ones that you want to keep in your “Recipes” album. A check mark will appear on those images. 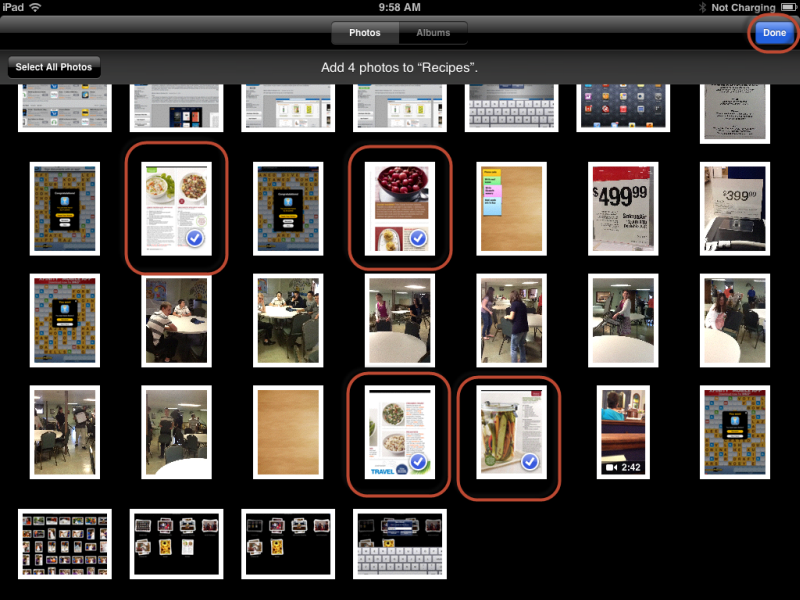 6. When you have selected all the photos, tap the “Done” button in the upper-right corner of your screen.

It’s Your Turn: What do you think?
…. Share your experience in the comments box below.