How to Tile Windows 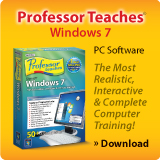 How do I keep 2 or more windows open on my desktop and go from one to the other without the previous one disappearing?

First, open one of the windows, make sure it is not maximized (if it is, maximized, or covering the entire screen, click the small symbol in the upper-right corner of the window between the red, X and the minimize button, which looks like a dash)

Using your mouse, point to the edge of the window until it turns into a double pointed arrow, and drag to change the size of the window. You can do this on all four sides until the window takes up half the screen.

Don’t forget that you can move the entire window by pointing to a blank spot in the title bar (blue bar at the top) and dragging the window.

Now, you should be able to use both windows, and see the contents of each of them at the same time.

You can do this with more than two windows, just make them smaller and arrange them so you can see each of them.

A handy shortcut that works most of the time, is to open both windows, then right-click on the taskbar, and click on either, “Show Windows Stacked”, or “Show Windows Side By Side”.

It’s Your Turn: What do you think?
…. Share your experience in the comments box below.

Elizabeth Boston is a Web designer, Social Media Consultant and managing editor of, “Ask The Computer Lady”.
Connect with Elizabeth on Google+